The Precarious Circumstances of Iran’s Christians 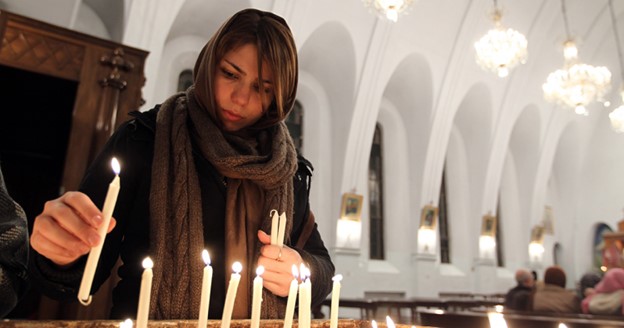 The Islamic Republic of Iran never seems to disappear from headlines, while its misdeeds persist—often out of sight and out of mind. A primary example is the regime’s ceaseless abuse of religious minorities—Sunni Muslims, Zoroastrians, Baha’is, atheists and Christians, and even at times government recognized Assyrian and Armenian churches. These abuses are often hidden from view. Yet the highly respected Open Doors World Watch List consistently places Iran among the world’s top 10 persecutors of Christians.

“Marathon talks to revive the Iran nuclear deal have hit a new roadblock, with Iran accusing the US of refusing to make the necessary political decisions to entrench the agreement in international law or to broaden the scope of economic sanctions that would be lifted,” The Guardian noted. Negotiators claim that progress on a nuclear deal is becoming “more and more difficult.” And while those nuclear talks drag on interminably, the regime’s abuse of religious minorities continues, and in some cases, it increases unabated.

The Baha’i faith has its origins in Islam and teaches the essential unity of all religions and of humanity. But it is considered heretical by Islamic fundamentalists. And Baha’is are often recognized as the most persecuted minority in Iran. However Christians—and particularly converts from Islam—also continue to pray a high price for their faithfulness. And there’s a reason for this troublesome distinction: Iran’s small but persistent Christian community has been growing at an unprecedented pace in recent years.

In 2021, commentator Daniel Pipes shared the concerns of an Iranian church leader, “What if I told you the mosques are empty inside Iran? What if I told you no one follows Islam inside of Iran? … What if I told you the best evangelist for Jesus was Ayatollah Khomeini [the founder of the Islamic Republic]?” An evangelical pastor, formerly an Iranian Muslim, concurred as far back as 2008: “We find ourselves facing what is more than a conversion to the Christian faith. It’s a mass exodus from Islam.”

Other outlets have echoed that Islam in Iran is on the decline. The Christian Broadcasting Network claimed in 2019 that “Christianity is growing faster in the Islamic Republic of Iran than in any other country.” Shay Khatiri of Johns Hopkins University wrote last year that “Islam is the fastest shrinking religion [in Iran], while Christianity is growing the fastest.”

This kind of growth encourages Christian believers, but also increases their risks of persecution. This is especially true of converts from Islam.

One young female former Muslim from Tehran, Mary Mohammadi, recently told Newsweek, “I have been threatened many times by the authorities.” She mentioned receiving intimidating messages in Farsi on Twitter, including warning that she would be attacked with acid and specifically threatened with “gang rape.” She explained, “If anything happens to me, the Islamic government of Iran, and its associates, inside and outside Iran, are responsible.” Appallingly, just days after those threats, Mary was indeed brutally assaulted. Today Mary’s future is sadly uncertain.

Christian persecution by Iranian authorities is not new but continues unabated. And despite the global pandemic, USCIRF reports that Christians in Iran faced intense religious persecution in 2021.

These include USCIRF religious prisoner of conscience Pastor Youcef Nadarkhani, who was charged in 2016 with “promoting Zionist Christianity.” He remains in prison due to a 10-year sentence.

In February, an appeals court sentenced three Christian converts to jail for spreading “propaganda.” Iran’s Ministry of Intelligence also summoned Christian convert Ebrahim Firouzi to the prosecutor’s office after he uploaded videos documenting his persecution. He was ultimately arrested and placed in prison.

On Feb. 15, Article 18 reported that three Christian converts—Ahmad Sarparast, Morteza Mashoodkari and Ayoob Poor-Rezazadeh—were officially charged with “engaging in propaganda and educational activities for deviant beliefs contrary to the holy Sharia,” and “connections with foreign leaders” and face up to 10 years in prison if convicted. The men were mocked by the court and called “Satan-worshippers who believe in the end of the world, the divisions between sects and races, the return of the Jews to their promised land, and the superiority of this race [Jews] to others, which proves the claim that they are working for foreign elements.”

Unsurprisingly, as the Iran nuclear talks drag on, the regime has tried to put on a kinder, gentler face for its Western debaters. One tactic was releasing nine incarcerated Christians, after which the court quietly reversed their decisions days later. A February 2022 article was headlined “Christian Converts Absolved by Supreme Court Now Face ‘Propaganda’ Charges.”

On Feb. 14, the U.N.’s special rapporteur Javaid Rehman was less than impressed with Iran’s treatment of Christians. In his latest report he noted the arrest of at least 53 Christians between Jan. 1, 2021 and Dec. 1, 2021. He said that they were arrested “for the practice of their religious beliefs.”

Rehman pointed out that Iran should “ensure in law and practice the rights to freedom of opinion and expression, peaceful assembly and association” and “that any limitation on these rights is in accordance with international law.”

Young Iranian lives are being transformed by newly found Christian beliefs, eclipsing depression and fear with love and joyful worship. However, any high hopes for positive change in the Islamic Republic’s vicious 40-plus year history of violent abuse is quite another matter, requiring us all to take an enormous leap of faith. May the persecuted get the freedom they deserve.