Between late July and September 1988, the Iranian authorities forcibly disappeared and extrajudicially executed thousands of prisoners for their political opinions and dumped their bodies in unmarked individual and mass graves. Minimum estimates put the death toll at around 5,000.

Since then, the authorities have tormented the relatives by refusing to tell them when, how and why their loved ones were killed and by keeping their remains hidden. To reinforce secrecy, they have also destroyed mass grave sites and forbidden commemorations.

By refusing to acknowledge the killings and fully disclose the fate and whereabouts of the victims, the authorities have committed the crime of enforced disappearance under international law. The anguish caused to families by this ongoing crime constitutes torture.

Given their widespread and systematic nature, Amnesty International considers that the extrajudicial executions and the ongoing enforced disappearances amount to crimes against humanity, and is calling for urgent action by the international community. No official has ever been brought to justice for these atrocities. Indeed, key judicial and government bodies which must ensure victims receive justice include officials who were tasked with carrying out the killings in 1988.

Mothers and Families of Khavaran

MORE THAN A QUARTER OF A CENTURY HAS PASSED SINCE WE BEGAN THE QUEST FOR TRUTH REGARDING THE FATE OF OUR LOVED ONES.

Building on the sustained campaigning and documentation efforts by survivors, family members of victims and human rights defenders over the last 30 years, Amnesty International has set out to reveal more of the blood-soaked secrets the authorities have tried to keep and advance the struggle for truth, justice and reparation. 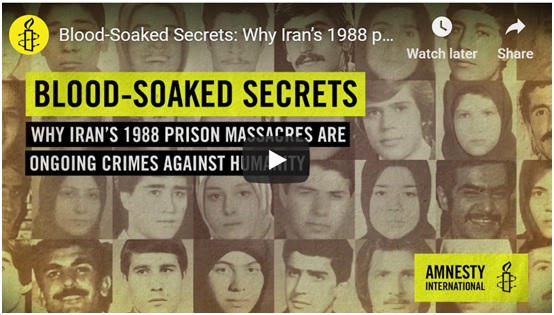 Families kept in the dark

In late July 1988, thousands of imprisoned political dissidents across Iran were suddenly cut off from the outside world. These men and women were mostly serving lengthy prison terms imposed because of their political opinions and peaceful activities such as distributing opposition leaflets and attending demonstrations. Some were children when jailed.

As terrifying rumours circulated about mass secret executions, families frantically went to prisons and government offices to obtain information, only to be met by silence and abuse.

Esmat Talebi, whose husband, Majid Simiary, and brother Adel Talebi were victims of the mass executions, described the desperation of families:

“We tried to go to all the government bodies we could think of. We went in front of parliament, to the office of [Speaker of Parliament Ali Akbar Hashemi] Rafsanjani. We handed in letters everywhere we went. We went to the Prime Minister’s office but were turned away [so] we sat outside on the street and wrote a letter and gave it to [his] office. In the letter, we wrote: ‘We are families of political prisoners and we have been barred from having visits with them… We want answers from you. Do something to stop the executions…’ Eventually, we ran out of places to turn to and were left helpless.” 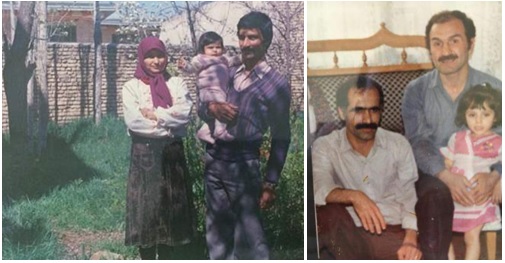 Families’ worst fears were confirmed from late October 1988 onwards when prison visits resumed and officials began telling many families that their loved ones had been executed. The notifications were cruel and sudden with no information given about the reasons and circumstances of the killings. Most families were just summoned to prisons or a government office, handed a bag which an official said contained the personal belongings of their dead relative, and ordered not to hold a memorial ceremony. Jafar La’li described the way the authorities informed the family of his brother Jamshid La’li’s execution:

“The Revolutionary Guards summoned my father to their office… There, he was taken into a room and sat on a chair. An official then walked in, put a bag on his desk and said: ‘Here is your son’s bag; we have executed him. Now take his stuff and get out.’”

Some families were not even given these last mementos. As a result, they were thrown into further uncertainty and, after 30 years, some, particularly elderly mothers, still struggle to believe that their loved ones are indeed dead.

Ezzat Habibnejad described how her mother-in-law remains in agony and disbelief that her son Mehdi Gharaiee is dead:

“The authorities gave us nothing, absolutely nothing… Sadly, 30 years on, my mother-in-law is still waiting for Mehdi to come back. Sometimes, when the phone or the doorbell rings, she jumps for it saying it might be Mehdi… She struggles to accept that Mehdi is dead and says, if he had died, they would have returned his body or his belongings.”

Some families were given misinformation or contradictory information and led to believe that their loves ones were alive. They only learned the truth later from former prisoners or informal government contacts. 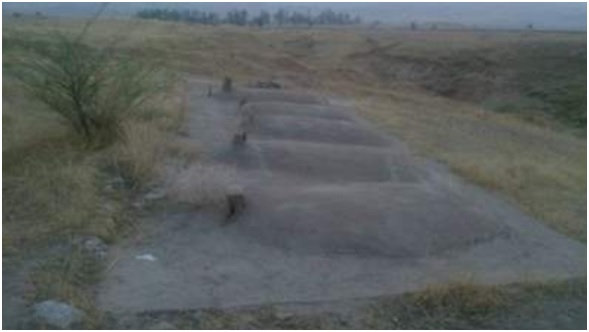 The Iranian authorities did not return the bodies of any of the victims to families. They also refused to tell most families where the bodies were buried.

Amnesty International knows of only five cities where the authorities ultimately told some families verbally that their loved ones were buried in mass graves and revealed their locations. However, publicly and officially, they have never acknowledged these mass grave sites.

In at least seven other cities, the authorities gave a few families the location of individual graves, but many fear that the authorities may have deceived them and that these graves may be empty.

In the rest of the country, families have either remained in the dark about the whereabouts of their loved one’s remains or learnt, through informal contact with officials, cemetery workers or locals, about their burial in confirmed or suspected mass grave sites.

Thirty years on, the Iranian authorities have yet to acknowledge the existence of any mass graves in the country, let alone allow families to request exhumations and search for bodies. They keep the location of victims’ remains a secret and are destroying suspected or confirmed mass grave sites by bulldozing and constructing new burial plots, buildings or roads over them.

How the mass killings happened

Between late July and September 1988, the Iranian authorities carried out co-ordinated extrajudicial killings intended to eliminate all political opposition. Across the country, groups of prisoners were collected from their cells and brought before “death commissions” involving judicial, prosecution and intelligence officials. The prisoners were asked if they were prepared to express repentance for their past political beliefs and activities and denounce their political groups. In some cases, they were also asked if they were prepared to execute or inflict harm on fellow dissidents.

Many prisoners did not realize that their answers to these arbitrary and cruel questions could make the difference between life and death. Some thought they were appearing before a pardon committee. Most were hanged or shot by firing squad after giving answers deemed “incorrect”.

Across the country, the victims were primarily supporters of the People’s Mojahedin Organization of Iran (PMOI), both men and women.

In Tehran province, hundreds of men affiliated with leftist opposition groups were also executed. Their interrogations appeared more like a religious inquisition. They were asked: Are you a Muslim? Do you pray? Did your father pray and read the Qur’an?

Those who identified as non-believers and said their fathers prayed were condemned to death for deserting Islam. Others were spared the death penalty, but were ordered to be flogged until they agreed to pray.

Leftist women were asked similar questions. In their case, the “incorrect” answer led to five lashes every prayer time (that is, 25 lashes a day) until they agreed to pray regularly or die under torture. 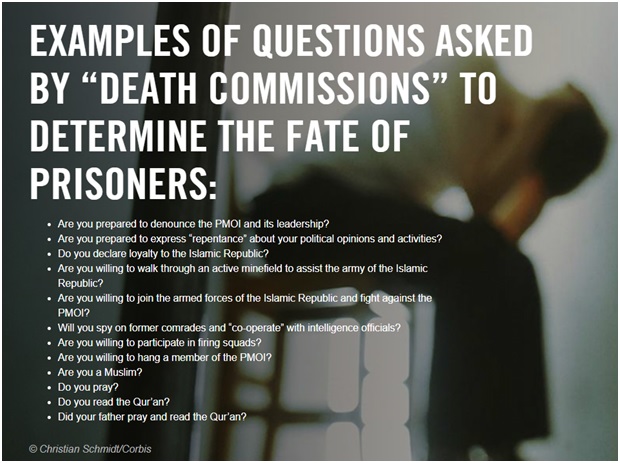 Iran is facing a crisis of impunity that goes beyond the lack of accountability for the enforced disappearances and extrajudicial executions of 1988.

Since 2016, the authorities have increasingly glorified the perpetrators of the mass killings as “national heroes” and likened any criticism of the atrocities to support for “terrorism”.

Judicial, prosecution and government bodies, which should be responsible for ensuring justice for both past and ongoing crimes, include senior officials alleged to have been involved in the killings.

This painful reality is intractably linked to the impunity enjoyed by the authorities since the 1980s; the authorities believe they can commit human rights violations without repercussions.

Amnesty International is calling on the UN to establish independent and effective investigations into the extrajudicial executions conducted in 1988, as well as the ongoing enforced disappearance of the victims and the torture and other ill-treatment of victims’ families. 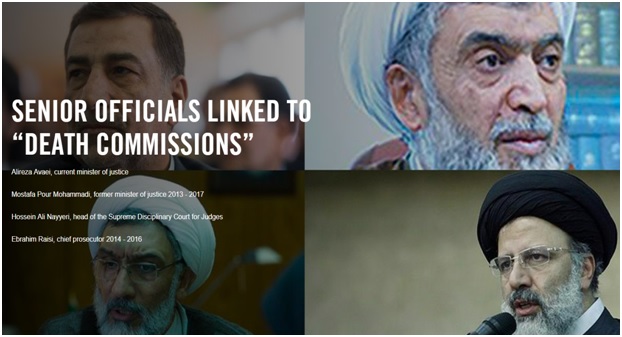 Will you stand in solidarity?

Three decades on from the mass killings of 1988, a burning sense of anguish, uncertainty and injustice continues to haunt the families of victims. Many families say that without a body to mourn over, their relatives have remained for them somewhere between life and death.

Their pain is compounded by the knowledge that those who orchestrated and perpetrated the massacre are getting away with their crimes. Many families have faced decades of harassment, intimidation, threats and attacks for daring to demand truth and justice. The authorities have even banned families from commemorating their loved ones. Officials have beaten and detained those who have tried to lay flowers at mass grave sites and forced families to sign undertakings that they will not hold any form of funeral, erect any memorial or place any objects on unmarked grave sites. This has left families in a permanent state of torment.

Now. Send messages of support using an image of a tulip, a flower that has cultural significance going back more than a millennium for the people of Iran, particularly in the context of popular struggles against political oppression and state violence. By doing this you will demonstrate global solidarity with the families and survivors, who have for decades seen the Iranian authorities trample on the flowers placed on mass grave sites and deny them justice.

The Iranian authorities relentlessly seek to hide the truth. With your help we are determined to stop them.

“They are even afraid of us placing flowers on the burial site. We tell them these are only flowers. They tell us your flowers are even more dangerous than guns and hand grenades” – Human rights defender Mansoureh Behkish, who lost a sister, four brothers and a brother-in-law in the mass executions of the 1980s. 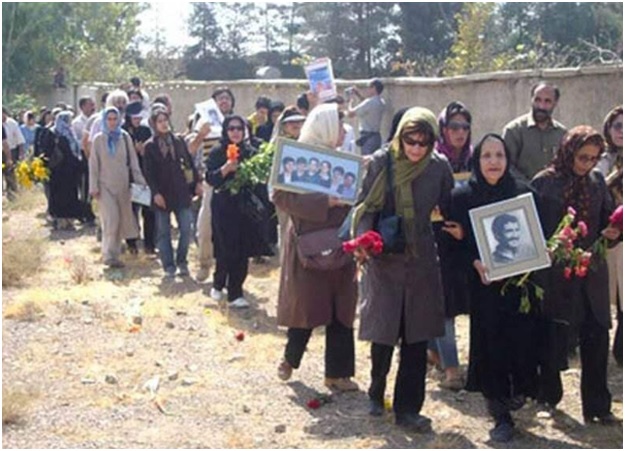 Tehran, Kavaran Cemetery is one of the unmarked mass graves sites of 1988 political prisoners mass executions in Iran