New York, September 23, 2022 – Capping a weeklong series of exhibitions and daily picket lines, some 3,000 Iranian Americans from across 40 U.S. states held a major rally at New York’s Dag Hammarskjold Plaza to denounce Raisi and stand in solidarity with the ongoing nationwide protests in Iran calling for regime change.

According to the latest reports by the main Iranian opposition group, the Mujahedin-e Khalq (MEK), dozens have been killed by the Revolutionary Guards in protests in 100 cities and 30 provinces in Iran.

The participants in the NY rally heard from high profile former Senators Joe Liberman (D-CT), Robert Torricelli (D-NJ), and Ambassador Sam Brownback (R-KS), as well as Ukrainian lawmaker Kira Rudik. Speakers and the rally participants condemned the presence of Iranian regime’s President Ebrahim Raisi at the UN and called on the international community to prosecute him for his role in the 1988 massacre of 30,000 political prisoners and other crimes against humanity in Iran.

Mrs. Maryam Rajavi, the President-elect of the National Council of Resistance of Iran (NCRI), addressed the rally via a video link.  “From Saqqez, Sanandaj, and Divandarreh, to Tehran, Karaj, Isfahan, Mashhad, Rasht, and other cities of Iran, brave protesters have shaken the pillars of Khamenei’s oppressive rule with their chants of “From Kurdistan to Tehran, Iran is drenched in blood,” “Khamenei is a murderer, his rule is illegitimate,” and “Death to the oppressor, be it the Shah or the (mullahs’ supreme) leader,” Mrs. Rajavi said in her remarks.

Madam Rajavi highlighted the fact that, “Khamenei is himself in the throes of death. The public’s enormous hatred toward Ebrahim Raisi, as well as the decay and decline of the Revolutionary Guard Corps (IRGC), signal the clerical regime’s end. Khamenei and Raisi drag their dying regime from one day to the next through the monthly executions of dozens of people…In contrast, the struggle and sacrifice of the MEK and Resistance Units give people hope and encourage them to prepare for the final uprising to bring down the mullahs.” Mrs. Rajavi called on the current session of the United Nations General Assembly to take immediate action regarding the clerical regime’s crimes against women, especially the crimes and daily killings by the mullahs’ guidance patrol.” Of note since the rally, the United States has placed sanctions on Iran’s “morality police.”

In his remarks, former Vice-Presidential candidate and U.S. Senator Joseph Lieberman said, “I am proud again 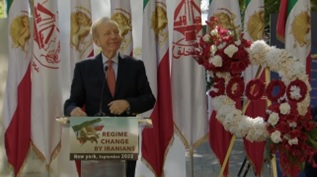 to stand with you today against Raisi, against Khamenei, and for freedom for the people of Iran. History is full of examples where regimes that nobody thought would be toppled have been overthrown.” Today he added, “this murderer is speaking to the organization that was founded to protect the peace. The protests are growing. The people of Iran, led by the resistance of Iran, supported by the NCRI and MEK, continue their protests.”

The choice is clear, Mr. Lieberman noted, “There is an alternative. It’s time to acknowledge that the regime in Iran will not change. It is time for us to change the regime and free the people of Iran. The resistance within the country bravely grows stronger, supported by the NCRI.”

Former Senator Robert Torricelli (D-NJ) told the crowd, “Raisi can call himself a president. We call him a 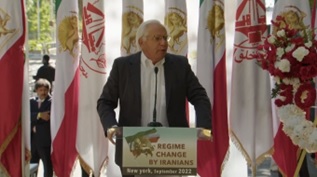 murderer. Raisi wasn’t elected. He was chosen.” He alluded to Iranian regime terror operations in Europe and the U.S. and said, “What is the regime he represents? His government sent a diplomat with a bomb in a diplomatic pouch to plant it in a peaceful gathering to take out lives. Raisi is the head of that regime. That is the person who just spoke to the General Assembly. We are gathered because we will never forget what Iran was and we will never stop fighting for what Iran must become. We say to the world, what is right for Ukraine is right for Iran.” Senator Torricelli directed his remarks at the rulers in Tehran and said, “Joining me today to speak to you is Senator Lieberman and Senator Brownback. To the regime, take note of who they are and what they represent. Democrats and Republicans, we as Americans are united…we are as united for a free Iran as we are for a free Ukraine.” 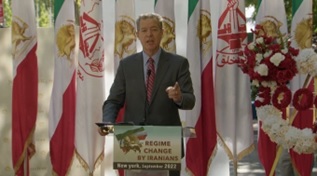 Governor and Senator said in his remarks, “The people of Iran are rising to claim their rightful place as a free people.” Raisi he said, “doesn’t deserve to address the UN. He deserves to be tried for the crimes he committed against his own people.” He added, “It is time to declare freedom for the people of Iran. That’s what we are for. We declare the end of the dictatorship over Iran. That’s what the people want.” With the growing protest and opposition movement he added, “the boiling point has been reached. The desire for change can no longer be contained.”

Ms. Kira Rudik, a leading Ukrainian parliamentarian said, “We are here to support each other as the free nations 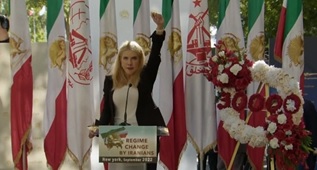 of Ukraine and Iran, People of free Iran. During these seven months [since the invasion of Ukraine], there were tough times when we didn’t know if there was hope. During these times, I told myself what Mrs. Rajavi told me: We can and we must.”

A number of distinguished Iranian Americans also addressed the rally.

Dr. Siamack Shojai, an Economist, Educator, and Administrator said, “To the policymakers in the US and UN and EU capitals: regardless of which party is in the White House, I

request that you look at history and see that the policy of appeasement will not stop the mullahs from acquiring nuclear weapons and will endanger the lives of millions of Iranians. We need regime change. Honorable Secretary-General of the UN General Assembly, clean your hands again and again. Because you shook the hands of the murderer Raisi who killed thousands of the best Iranians who stood for freedom. He should be prosecuted, not welcomed to the UN.”

In his remarks, Professor Kazem Kazerounian reiterated that, “The cries of anger that we hear in Iran today is 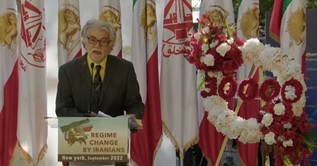 not the voice of a mourning nation. It is the manifestation of a nation risen for change. This is the result of more than 40 years of persistence and resistance in the toughest of times. It is a resistance movement that has a plan, organization, leadership, and more importantly, has made sacrifices… We mark this year as the year of freedom, resistance, and equality. Our exams will be in the streets and squares of Iran.” 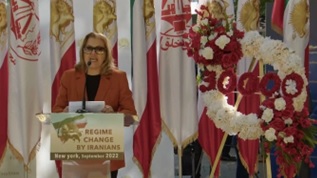 with Raisi at the “Death Commission” in 1988, said in her remarks, “Last week, we witnessed the brutal murder of Mahsa Amini, who was arrested by the regime on bogus charges of violating hijab rules and killed a few hours later. For years, the regime became more violent. On the other hand, the members of the resistance became more resolute, to the point that the regime became desperate. The regime decided to eliminate the problem from the root.” Today she added, “the regime’s president is one of the key players of the 1988 massacre. It is a shame for the UN that Raisi is here today. But this will be the end of the regime.”

In his speech, Doctor Firouz Daneshgari, a renowned Professor and Surgeon at Case Western Reserve University 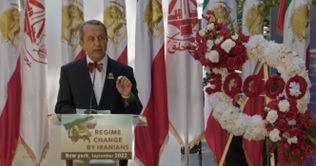 said,  “I am addressing you as a former political prisoner who has been tortured and witnessed the murders committed by Raisi. He is a murderer who has no place among world leaders. He must be arrested and tried for his crimes against humanity. Khamenei appointed him to continue his brutality to suppress protests.” The ongoing uprisings he added, “will overthrow the regime. Hail to all the protesters across Iran.”

Ashraf Zadshir, MD, a California based researcher and physician also stated, “The conditions in Iran have caused 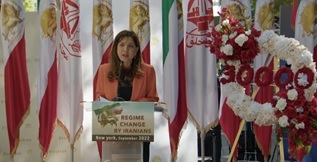 a brain drain in Iran. As you know, many students are under the cruelest torture in Iran’s prisons, including Ali Younesi and Amirhossein Moradi.  She then decried Mahsa Amini’s senseless murder in the hands of IRGC security forces and said, “But Mahsa is not dead, Mahsa has become the spark for the current uprising for regime change.” She credited Maryam Rajavi and leadership of women in the Iranian resistance with inspiring a new generation of women and girls who lead the movement for democratic and secular republic in Iran.

In his remarks, Bishop Robert Stearns, the Founder and Executive Director of Eagles’ Wings, said, “We care 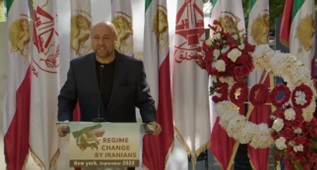 about what’s happening in Iran because their issues touch our entire world. It’s an issue of freedom and human rights. The time for change is now.  People from many different faiths and religions can unite around this. It is time for the tyrant Raisi to go…We say Maryam Rajavi’s ten-point plan is the path to freedom. All of history teaches us that eventually evil falls and good triumphs. I know that change is coming very quickly in Iran. I believe that we will see very soon see the walls of evil fall and freedom come to the people of Iran.” 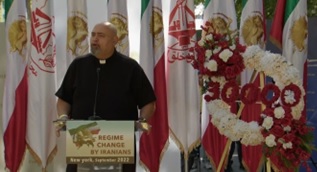 closer to achieving freedom of equality, freedom of the press, and freedom of religion in Iran. Raisi continues to use execution to silence the majority in Iran. But the uprisings have begun and will not stop until freedom rings in Iran.” He said, “If the US wants stability in the Middle East, it must sit at the table with Mrs. Rajavi. Mrs. Rajavi should be addressing the UN, not Raisi.”

Seena Saiedian, a student at UC Berkeley and a member of the Organization of Iranian-American Communities’ young professional chapter reminded rally participants that, “Iranian society is so explosive than anything can trigger another major uprising and nationwide protest. And Mahsa’s death did just that. Iranians all across the country are risking their lives in the streets protesting her killing and calling for the downfall of the dictatorship.” Our message to these protesters is clear he aded, “we hear you, we stand by you, and we urge the international community to stand with you in rejecting the entirety of the regime.”

Kiana Afshar, a graduate of the University of Virginia and Member of OIAC’s Young Professionals said, “Chants denouncing the brutality of the government ring across the cities of Iran, clearly showing the collective despair and anger of the Iranian people against Raisi, Khamenei and the Mullahs.” ”My message to my brothers and sisters in Iran,” she added, “is that we are all here with you, until Iran is free again. And that day is not too far.”

Iranians have the right to revolt to achieve democracy