Is Canada to Become Iran’s Forward Operating Base Against the U.S.? 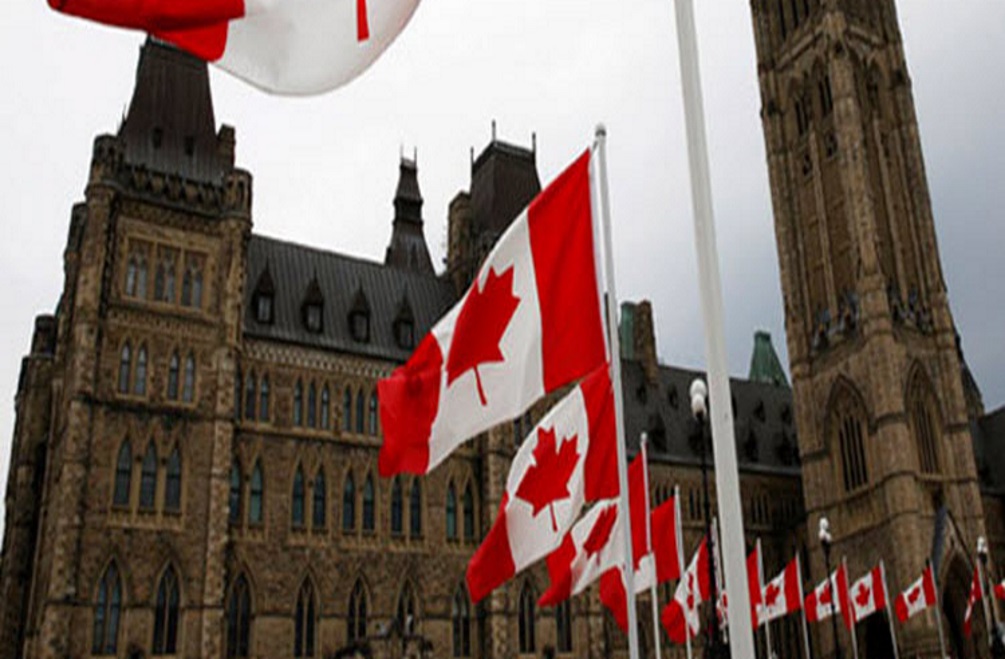 In 2012, Iranian diplomat Hamid Mohammadi said there were many Iranian-Canadians “working in influential government positions” and called on others to “occupy high-level and key positions.” Now, in Canada, Iran is making an effort to expand its presence, with an aim to use America’s neighbour as a “forward operating base” for influence operations against the American government.

Hassan Abbasi, a leader in the Islamic Revolutionary Guard Corps (IRGC), was seen boasting about a “guerilla movement of Iranian agents living and working in the United States,” in a recent video. He said that Iran, is leading a clandestine army of potential martyrs within the US.

An article was published by The Gatestone Institute written by Tom Quiggin, a court qualified expert on terrorism and practical intelligence, who is based in Canada. He writes:

▪ Iran’s aim is to use American’s northern neighbour, Canada, as a “forward operating base” for influence operations against the American government.

▪ The Trudeau government has shown both a past and present affinity for dictatorial governments. Trudeau himself said he admires the government of the Peoples Republic of China and their “basic dictatorship.” He publicly mourned the passing of Cuban President Fidel Castro. The statement made no note of the 60-plus years of dictatorship, and Cuba’s brutal suppression of human rights.

▪ among its teachings, the Ontario Jaffari Mosque’s school suggested that boys should play sports so they can be “physically be ready for jihad whenever the time comes for it.” Girls, on the other hand, were told that they should “stick to hobbies that prepare them to become wives and mothers.

Iranians on both sides of the border are concerned about infiltratione of North America.

Quiggin writes, “Iran has been forced to recalibrate its efforts during the past decade due to the shifting views of Canadian and American governments. The Obama Administration (2009-2017) gave virtual free rein to Iranian agents of influence. They were supported by a variety of Administration insiders such as Valerie Jarrett. When the Iranian Navy seized ten US Navy sailors and photographed them in humiliating positions, Vice President Joseph Biden described this as “just standard nautical practice”. Predictably, Iran forced a US Navy female sailor to wear a hijab, possibly as a way of showing male dominance over an American female.”

Canada previously allowed Faisal Larijani to build infrastructure and support, including the Center for Iranian Studies, located in Toronto at 290 Sheppard Ave. W., which was incorporated in January 2008.

Governmental support for Iran dropped when Prime Minister Harper (2006-2015) was elected, ending with the shuttering of the Iranian Embassy in 2012. The newly enacted “Justice for the Victims of Terrorism Act” was used as the leverage to remove them, according to Quiggin, who adds, “The current situation has now reversed itself. The newly elected Trump Administration appears to be taking a much harder stand against Iran while Canadian Prime Minster Trudeau is committed to outreach to Iran and a possible re-opening of the Canadian and Iranian Embassies.”

Quiggin goes on to say, “Iran remains listed as one of three global state sponsors of terrorism, along with Syria and Sudan, according to the US State Department. Canada also lists the Qods Force as a terrorism entity and states that it “is the clandestine branch of Iran’s Islamic Revolutionary Guard Corps (IRGC) responsible for extraterritorial operations, and for exporting the Iranian Revolution through activities such as facilitating terrorist operations.”

Iran’s human rights record is dismal. Human Rights Watch called the situation in Iran “dire.” Iranian women are discriminated against on such issues as marriage, divorce, and child custody. Women have been jailed for speaking out publicly in favor of equal rights for women.

Quiggin writes, “According to Canada’s former Foreign Minister Stephan Dion (2015-2016), official talks with Iran on re-establishing diplomatic ties have already begun. This is not a surprise; Prime Minister Trudeau campaigned on the issue of doing just that. Some Canadian sanctions against Iran have already been lifted, as of February 2016. Canada also downgraded its warning against all travel to Iran — despite ongoing arrests and the torture of a variety of Canadians and others.”

He adds, “In 2014, while a Member of Parliament, Justin Trudeau gave an interview to the Montreal-based newspaper Sada al-Mashrek. This paper is openly known to be Khomeinist in nature and supports Iran (as well as Hezbollah). That Trudeau would speak to such a paper in the year before an election suggests he was already reaching out to Iranian regime support in Canada. During this interview, Trudeau also told the paper that he would have a special immigration program that was more open to ‘Muslims and Arabs’.”

Appointed in 2017, Foreign Minister, Chrystia Freeland has views that seem slightly different. She has not indicated that she will or will not pursue the re-opening of the Canadian embassy in Iran or that of Iran in Canada. In March of 2017, a spokesperson for Freeland said, “We maintain our firm commitment to the human rights of Iranians. We continue to oppose Iran’s support for terrorist organizations, its threats toward Israel, and its ballistic missile program.” She also stated, “With these amendments to Canadian sanctions against Iran, Canadian companies will now be able to position themselves for new trade opportunities, but we will also maintain rigorous controls on any exports that raise serious proliferation concerns.”

“Liberal Member of Parliament Majid Jowhari hosted a delegation of three members of Iran’s parliament in his home. The delegation included MPs Alim Yarmohammadi, Yonathan Betkolia and Mehrdad Lahooti and Ali Bahraini, who is listed as secretary of a development committee. While Joseph Pickerill, a spokesperson for then Foreign Minister Stéphane Dion, said that the delegation was not an official visit, such a highly unusual meeting raised eyebrows,” writes Quiggin.

The Iran Canada Business Council and Export Quebec recently hosted a meeting on business opportunities in Iran after the lifting of sanctions. Invited to participate in this March 28, 2017 Montreal meeting (by Skype) was Iran’s Deputy Minister of Industry, Mining and Trade, Medhi Karbasian. Medhi Karbasian is also the Chairman of MIDRO (Iranian Mines and Mining Industries Development and Renovation Organization), and Quiggin says all of these businesses appear to have commercial ties to the IRGC. Karbasian, he say has “a longstanding direct involvement in government companies.”

Quiggin continues, ”His resume reads like a sanctions list — at one point he was board member of UN-sanctioned IRISL; a board member of US- and EU-sanctioned NITC; chairs the US-sanctioned Parsian Bank; and, most importantly perhaps, vice-chairman on Kharazmi’s board as representative of Sepehr Energy Co., a recently formed private energy company controlled by Bank Saderat.” He claims that all offices of Bank Saderat worldwide are considered to be IRGC-designated affiliates.

One of the leading proponents of the Iranian/Khomeinist ideology in Canada is Imam Rizvi, of the Jaffari Mosque in Thornhill, Ontario. He speaks to support the government of Iran and at a 2012 Carleton University conference, he stated, “Khomeini had proved that Islam is not just a religion of prayers and personal laws that only deals with matters of divorce and inheritance, rather it is a complete code of life that can govern all aspects of society — spiritual, material, as well as personal, social, economic and political aspects.”

The conference was titled “The Contemporary Awakening and Imam Khomeini’s Thoughts.”It was run to celebrate the anniversary of the death of Ayatollah Khomeini. Quiggin says that Imam Rizvi also believes and advocates that sex with 9-year-old girls is acceptable, as long as it occurs within munqati’ (temporary) or da’im (permanent) marriage. In his book, “Marriage and Morals in Islam”, he says that girls/women can be entered into temporary marriages, and Quiggin writes,“apparently from the age of nine and upwards.” and he adds that in the eyes of many, ‘temporary marriage’ or muta is another word for prostitution.” He states that these muta marriages may be occurring now at the Jaffari Mosque.

“One of three schools run by the mysteriously well-funded Jaffari Mosque was also shut down during a 2012 hate crimes investigation. The teaching materials used by the mosque were from Iran (the Al Balagh Foundation) and from the Mostazafan Foundation of New York, which is identified as an arm of the Iranian government. Among its teachings, the mosque’s school suggested that boys should play sports so they can be ‘physically be ready for jihad whenever the time comes for it.’ Girls, on the other hand, were told that they should ‘stick to hobbies that prepare them to become wives and mothers’,” writes Quiggin.

Regarding the treatment of each other’s citizens, Canada and Iran have a history. Quiggin writes that, “Iran beat, raped and tortured to death in 2003 Canadian citizen and freelance photographer Zahra Kazemi. Her ‘crime’ was being a woman and having taken picture of a demonstration in 2003 in Tehran. Currently, Iran is holding Abdolrasoul Dorri Esfahani, an Iranian-Canadian. He is a member of the Ontario Institute of Chartered Accountants and a former adviser to Iran’s Central Bank. He was, by all accounts directly involved in the $1.7 billion cash-for-hostages deal. He was indicted on spying charges in early March 2017.”

Canada holds Mahmoud Reza Khavari Ban. It’s believed that he helped orchestrate a $2.6 billion fraud through several Iranian banks. Bank Melli, one of the banks involved, is believed to be an IRGC/Quds Force front, according to Quiggin.

Khavari had been a citizen of Canada since 2005 but returned to Iran shortly after getting his citizenship, and there the fraud in Iran apparently began in 2007, raising the question of why Khavari sought Canadian citizenship. Khavari returned to Canada in 2011 after details of the fraud began to emerge, writes Quiggin, who questions his treatment by the government of Canada, and suggests that he must have struck some sort of deal with the government.

Not long after his arrival, the Iranian embassy in Canada closed in 2012. However, no concrete links seem to exist between the two events. Iran still has an Interpol “Red Notice” on Khavari and still wants his extradition as of October 2016.

Quiggin wonders how Prime Minister Trudeau would handle this case in the event of the reopening of Iran’s Embassy in Ottawa. “It would appear to be a major stumbling block to re-establishing normal relations. For Canada to allow extradition, Iran would have to waive the death penalty that is currently hanging over the head of Mr. Khavari. Iran has executed several other senior executives who were involved in the fraud, so this seems unlikely,” he writes.

The Trudeau government has shown both a past and present affinity for dictatorial governments, according to Quiggin. He adds, “Trudeau himself says he admires the Government of the Peoples Republic of China and their ‘basic dictatorship’. He publicly mourned the passing of Cuban President Fidel Castro in an official government statement describing him as ‘larger than life leader who served his people for almost half a century’. He also stated that the Cuban people had a deep and lasting affection for ‘el Comandante’. The statement made no note of the 60-plus years of dictatorship, Cuba’s brutal suppression of human rights nor its systemic persecution of gays.”

Trudeau’s political advisor is his brother, Alexandre “Sacha” Trudeau. “The New Great Game,” a documentary was co-produced by Sacha Trudeau and the Iranian state-owned PressTV. It stated that Iran’s nuclear program is for “defensive” purposes only, serving as an effective “deterrent” against Israeli “aggression” and belligerence. An earlier documentary by Sacha Trudeau, ”The Fence”, profiled Zakaria Zubeidi, then leader of the terrorist group Al Aqsa Martyrs Brigades. Quiggin says it portrayed Zubeidi as a Robin Hood-like “leader of the resistance.”

It appears likely that Iran will increase its influence activities in Canada, under Prime Minister Justin Trudeau, writes Quiggin, “and based on his time in office to date, a dangerous development for the USA as it moves to confront Iran.”