WASHINGTON, DC- On December 15, 2020, the Organization of Iranian American Communities (OIAC) hosted a virtual event on US policy toward Iran. The event was titled “Iranian Americans Call for a Comprehensive US-Iran Policy” and featured several members of OIAC’s Advisory Board, members of OIAC’s Young Professionals and Students Chapter, and a panel of Iranian American community leaders. The focus was on countering the escalating human rights violations in Iran as well as the regional and terror threats posed by the Islamic Republic.

With the next U.S. administration set to take office in January 2021, the message of Iranian Americans is clear: The regime in Tehran lacks legitimacy, and the United States should stand with the people of Iran since they hold the real leverage for change from within. A key element in OIAC’s call for a comprehensive US-Iran policy was the need for bipartisanship. The speakers made it clear that the struggle for a free and democratic Iran is not a republican nor a democrat issue; it is an issue of human rights, global peace, security, and stability. 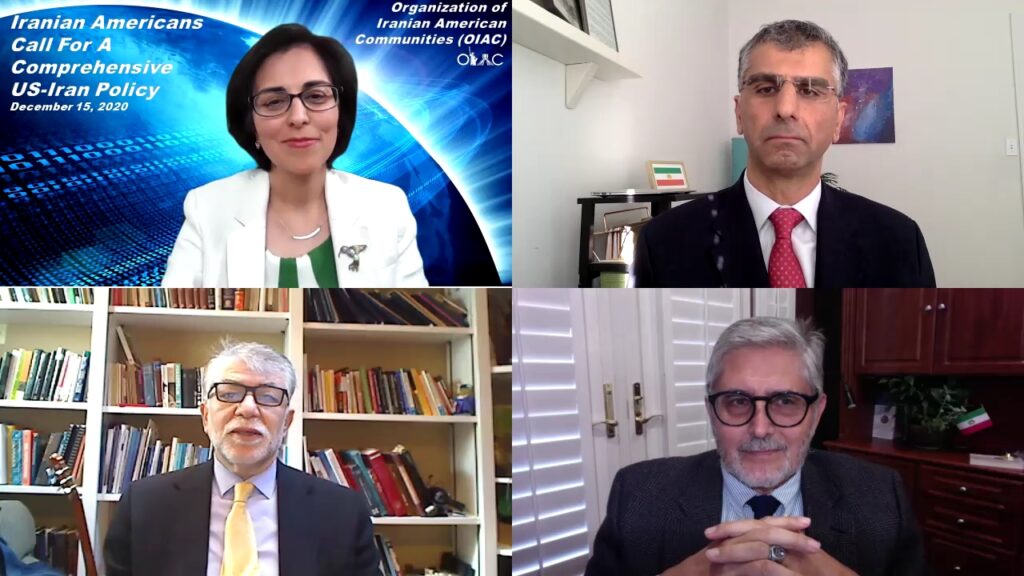 Professor Kazem Kazerounian, a senior member of OIAC’s Advisory Board, suggested that current socio-political dynamics can lead to the “final blow” to the regime. He noted that “this regime has failed the Iranian people,” with “80% of the population living below the poverty line and the economy in a freefall.” Meanwhile, the regime has escalated arrests, torture, and public executions to control the restless population that has nothing to lose. Referring to the waves of massacres, including the 1988 Massacre, and the recent high-profile executions of Navid Afkari and Ruhollah Zam, Professor Kazerounian added that the regime continues to expose its “true face to the international community” as the Iranian people’s “resistance and defiance grow day by day.”

Professor Ali Parsa of the OIAC Advisory Board explained how Iranians “refer to this regime as a religious fascism that uses terrorism at home and abroad to stay in power.” He added, “I think if anyone has any doubt about how deceptive this regime can be, all they need to do is to look at the protests and the slogans by the Iranian people.” Like: “reformers, conservatives the game is over” or, “leave Iraq, Syria, Yemen, tend our grievances” or, “the enemy is here (Mullahs), they lie saying it is the U.S.”

Dr. Majid Sadeghpour, Political Director of OIAC, outlined the bipartisan congressional support for a free Iran. He referred to Iranian terrorist activities over the last four decades and underscored that finally for the first time “an Iranian diplomat has been apprehended” to face criminal charges with “compelling evidence that demonstrates how far the regime is willing to go when it comes to eliminating opponents and conducting terrorism.” He added, “The Middle East that we have today is quite different than the Middle East of a decade ago, or even two years ago. The political shifts and alliances formed in the Middle East are no longer in favor of the regime…The situation is ripe for a major transformation not just in Iran but the entire region.”

Dr. Ramesh Sepehrrad, who moderated the Advisory Board panel, summed up the key drivers for a comprehensive 2021 policy: 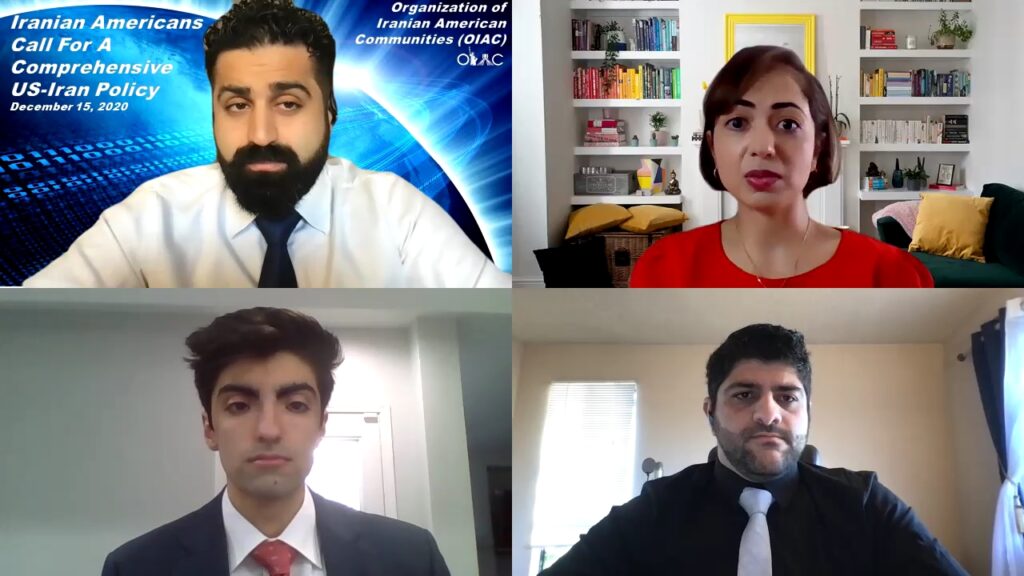 The second panel, moderated by Amir Emadi, member of OIAC’s Young Professionals and Students, analyzed the status of the pandemic in Iran, the change in the political environment in the US and the need for a more concerted effort by the international community to support the call for change in Iran.

Dr. Azadeh Sami shared some of the eye-opening statistics across Iran, including its COVID-19 death toll of 185,000 representing 237 deaths per 100 thousand (the worst in the world). She highlighted how the Iranian regime had grossly exacerbated the public health situation by prioritizing   to spend on export of terrorism and regional meddling instead of supporting medical care-workers and investing in the nation’s healthcare system. In fact, while the regime publicly decries sanctions for its abysmal healthcare system, Iranian government officials have declined multiple offers of assistance on COVID-19 from the rest of the world, including the help from the United States. Dr. Sami emphasized that the “regime’s priorities are clear” and that any sanctions relief would be used for nefarious regional meddling instead of alleviating the suffering of Iranian people.

Seena Saiedian, a student at UC Berkeley, suggested, “On the issue of the Iranian threat, Congress has been noticeably clear that it is not a Republican or Democrat issue, or even just an American issue; it is an issue of global peace, security, and stability.” He added, “The new administration has an opportunity to rally the international community together in order to develop a truly cohesive and concerted policy of accountability, and one that is focused on the needs and desires of the Iranian population.”

More specifically, Behrang Borhani focused on two primary goals for the next administration:

(1) Ensuring that the Iran’s regime cannot continue to export and conduct terrorism regionally and globally, while

(2) Recognizing and promoting the desires and basic rights of the Iranian people to be paramount to the peace and stability in the region. 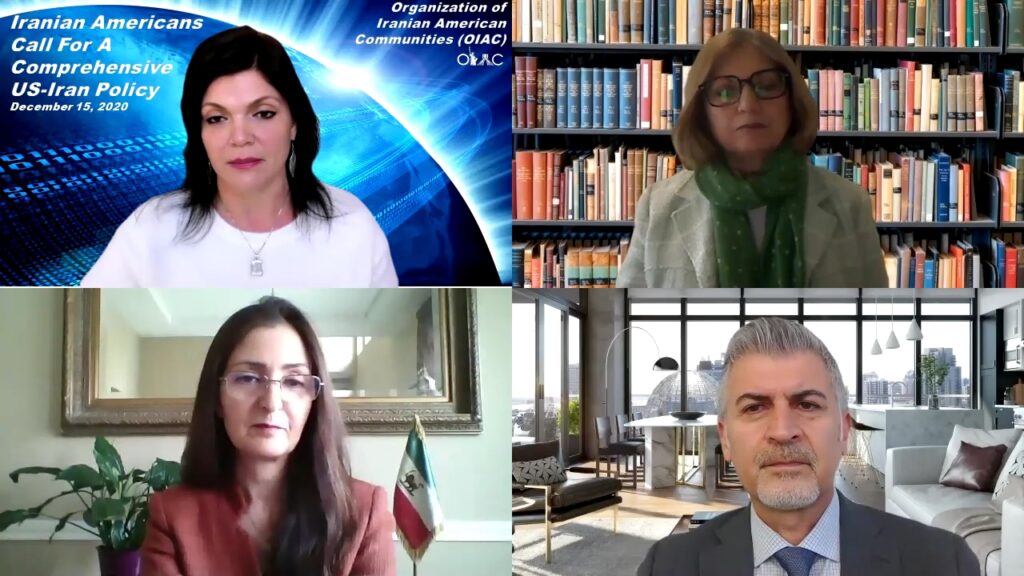 Mr. Sharif was immensely proud of the U.S. House Resolution 374, cosponsored by a strong bipartisan support, including the main two sponsors who were from California. Ms. Hesami and Ms. Andalib both echoed these sentiments and supported a firm U.S. policy that amplifies the Iranian people’s quest for a democratic, secular, non-nuclear republic of Iran. Ms. Andalib addressed Maryam Rajavi’s 10-point plan which is widely recognized by the majority of the House and European parliamentarian members as a doctrine for a free Iran.

OIAC’s year-end 2020 virtual conference reconfirmed a clear message: the incoming U.S. administration has a unique opportunity to stand with the Iranian people, and in favor of a comprehensive U.S.-Iran policy that benefits the Iranian people, the United States, the region, and the world.